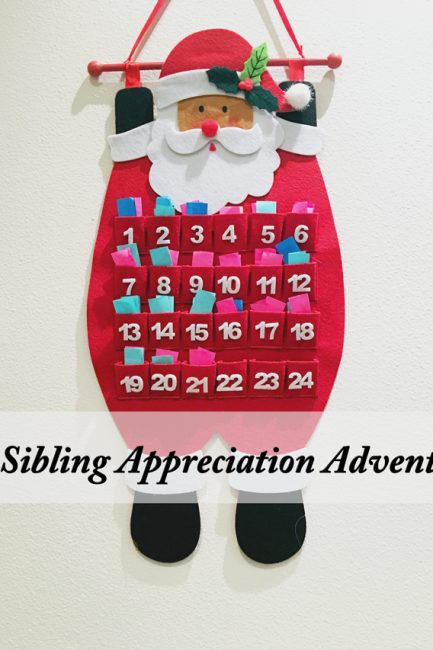 This "Sibling Appreciation Advent Calendar" is an idea our elf came up with last year and worked really well. On the first day he appeared, always the day after Thanksgiving in our house, he arrived with this Advent Calendar (only $15!) and an explanation. The idea is simple. Our elf asked the kids to take a minute each day to write something nice about each other and place it in that day's pocket. The next morning the kids wake up to find the notes they wrote about each other and a small … END_OF_DOCUMENT_TOKEN_TO_BE_REPLACED

Sometimes, in my weaker moments, when my three year old (the one going on, like, sixteen) decides now is the time to assert her three feet of independence, I bluff. The trouble is, it’s starting to backfire. Here’s a recent example. “Okay, ready to go? We have to go pick up your bothers and sister at school!” This is an exciting event ninety percent of the time, and she usually hustles to grab shoes and whatever miscellaneous items must accompany her - and there are a lot - but lately, … END_OF_DOCUMENT_TOKEN_TO_BE_REPLACED

Close to a million hits in less than half a second can’t be wrong - bedtimes are important for kids. And that’s a bit of problem around here, because we suck at bedtime. But we can’t be the only ones, right? I mean, with the exception of my one friend who, every single night, spends a good twenty minutes listening and chatting and reading and, you know, just killing the parenting game with one child while her husband does the same with the other - and then they switch - how many parents … END_OF_DOCUMENT_TOKEN_TO_BE_REPLACED

I don't know if it's just me, but I find that the beginning of a new school year is a great time for a parenting re-boot. Summer's over and we're doing our best to return to our normal routines (and to work on any behavior issues that may have crept up as we've all indulged in lax routines over the past few months). It just seems like the perfect moment to step back and take stock of our parenting techniques (what's working and what's not) as we embark on another year. Which … END_OF_DOCUMENT_TOKEN_TO_BE_REPLACED

Last spring, I was soaping up our two littlest in the tub when I felt a bumpy patch on the inside of our then five-year-old’s upper thigh. I took a closer look when I was toweling him off, and saw a group of little red bumps. They didn’t seem to bother him, so I made a mental note and we moved on. But the next time he was in the tub, I felt them again and this time, they were bigger - less like little bumps now, and more like raised, red, pimply-looking warts. Uh, gross. “What are … END_OF_DOCUMENT_TOKEN_TO_BE_REPLACED

Everyone's kids are back in school now right?! Great- I've got a freebie you'll love. The beauty of this is you don't have to do it on the very first day of school, anywhere in the first month or so will do, so the pressure is minimal! It's a questionnaire your kids fill out at the beginning of the school year and then again at the end of the year. Get the FREE Back-to-School Printable Now! It's such an easy keepsake! No taking pictures and printing them out, no props needed. Just get your … END_OF_DOCUMENT_TOKEN_TO_BE_REPLACED

On the first, second and third days of kindergarten, my just-turned-six-year-old was a champ. He marched right on in and emerged six hours later, triumphantly on day one, and then a little more wearily as the days passed. Then, on Thursday morning, as we waited for the bell to ring, his sister whacked him straight in the face with the tetherball. And the floodgates opened. “I don’t want to go to school,” he sobbed, wrapping his arms around my thighs. “I miss you too much, and it’s too … END_OF_DOCUMENT_TOKEN_TO_BE_REPLACED

Don't worry - this is not another book about ridding your life of all excess items. Rather, Cleaning House: A Mom's 12 Month Experiment to Rid Her Home of Youth Entitlement is a parenting book I first read about three years ago and continue to think about with regularity. As I was reflecting on what I wanted to do with my kids this summer, the book again came to mind as I was thinking about what kitchen skills we really need to start practicing more. Kay … END_OF_DOCUMENT_TOKEN_TO_BE_REPLACED

Our oldest son lost his first tooth the day he turned six. Four years later, I still remember so clearly how that little tooth, so white and tiny, caused such a whirlwind of excitement and emotion. Our son was a mixed bag of thrilled and surprised, flashing his gap-toothed smile around and then asking a little worriedly, “Do other things fall out like this?” His little sister was in absolute awe, tugging his arm and peering into his mouth and sighing about how she couldn’t wait until her … END_OF_DOCUMENT_TOKEN_TO_BE_REPLACED