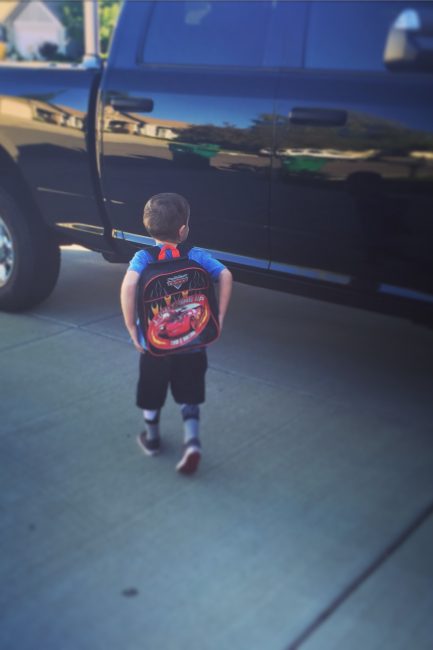 On the first, second and third days of kindergarten, my just-turned-six-year-old was a champ. He marched right on in and emerged six hours later, triumphantly on day one, and then a little more wearily as the days passed. Then, on Thursday morning, as we waited for the bell to ring, his sister whacked him straight in the face with the tetherball. And the floodgates opened. “I don’t want to go to school,” he sobbed, wrapping his arms around my thighs. “I miss you too much, and it’s too … END_OF_DOCUMENT_TOKEN_TO_BE_REPLACED

Today's 'Parenting Styles' post could not resonate with me more. Our youngest son, M, will also have his first drop-off experience this fall... and I'm so anxious. Like you wouldn't think a mama going through it for the third time would be. The thing is, the baby of our family is used to being just that- the baby. He's used to being doted on and constantly surrounded by siblings and parents. This fall not only will his beloved sis (and best bud) be leaving him in the dust as she heads off … END_OF_DOCUMENT_TOKEN_TO_BE_REPLACED

We've got a whole "Back-to-School " theme going on here this week. Last week it was 6 Things Your Child's Teacher Wants You to Tell Them and on Monday I finally released our new Kids' Responsibility & Money Management Kit! (I'm SUPER excited about this. It's going to be just the thing to help get your kids organized and ready to take on the school year, as well as some new responsibilities.) Today, I'm over at eHow Mom discussing 5 easy tricks we use to calm back-to-school jitters. These … END_OF_DOCUMENT_TOKEN_TO_BE_REPLACED