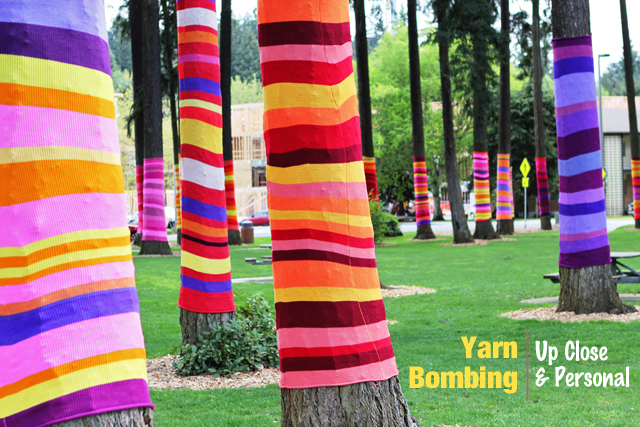 Have you ever had a day you weren’t really looking forward to, for one reason or another, but actually turned out to be really great?  That’s exactly what happened to me a few Fridays ago.  We had C’s dental appointment and I decided to bring S along so she could get the feel of the place for when her turn arrives.
The idea of trying to keep her still while making sure he was relaxed was already worrying me a bit that morning.  To add to what could have been an awful series events, upon arriving for the appointment the receptionist kindly informed me that I was an entire hour early (long story short – my iPhone had been doing this crazy thing where only my calendar somehow got switched to mountain time).
Obviously this all could have gone very wrong very quickly.  Instead, someone was smiling down on me that day.  The staff kindly got us in early, both C and S were total rock stars, and – the cherry on top of it all – on the way home I spotted an honest to God yarn bombing.

I honestly couldn’t believe it at first.  Being a regular around the blogoshpere means I’m quite familiar with the concept of yarn bombing, in theory, but I never really expected to see it in all it’s glory in real life.  I have no idea who was responsible for this particular bombing but rumor has it that it’s all the work of only one amazing woman.

Upon seeing the 20 – 30 brightly adorned trees, I immediately headed home to grab my camera.  On the way I promised the kids a special surprise as reward for their exemplary dental office behavior.  I think they were hoping for a park outing – they had no idea what they were in for.

This is them about 30 seconds after entering the park, running around the happy trees absolutely giddy.  It was the only appropriate response, the sight of all that knitting called for an instant celebration.

The variation was really something to behold.  Along with lots of stripes, there were trunks wrapped in patch worked pieces and even some fuzzy balls.

And just when the magic was finally starting to wear off, the kids spotted something else to get their hearts racing.  Three guesses as to what it was…

A playground!  Nestled right in amongst the magic.

It was a nice one too, complete with two sets of slides, swings, and a huge sand box.

And of course the trees were there all the while in the background.

All and all we spent about three hours hanging out and this was the face I got when I told C it was finally time to return home.  To be honest, I kinda felt the same way.  I love that we’ll always have that day to remember (and the photos to prove it).