You are here: Home / In the Kitchen / Party DIY: Make Custom Colored Donuts

Today I have another short tutorial from S’s recent 1st birthday bash.  I decided to keep it to two homemade elements for the party – her paint chip birthday banner and some custom colored donuts.  Why donuts instead of more traditional party treats like cake or cupcakes?  The party was at 10:15 in the morning (we were working around naps) so I thought it would be fun to do something a little more breakfast-y.
In fairness, I guess I should say these are “semi-homemade”.  In an effort to keep the party planning as stress-free as possible, I decided to buy plain donuts and make the icing.  I used this recipe and was very happy with how pretty and colorful they turned out.
How they tasted was a different story.  I used cake donuts from Fred Meyer because, at $3.99/dozen, they were a bargain.  They weren’t bad – just dense.  I missed the airiness of more traditional donuts.  If you’d like to make your own colored donuts, I’d spring for better donuts or you can try the recipe included in the link above and make them from scratch.  Check it out then click through for a visual step-by-step on how to make the icing. 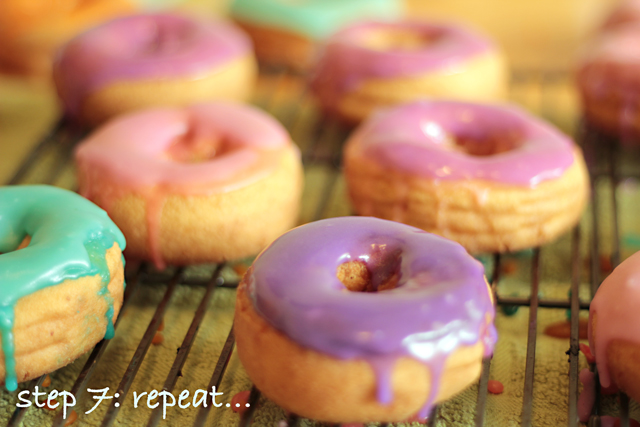 That’s it!  I had fun making lots of different hues by dunking a few donuts, adding more food coloring to intensify the color, and repeating.  Also, one last tip, the icing isn’t a true white to begin with (due to the vanilla) so deeper shades worked best.