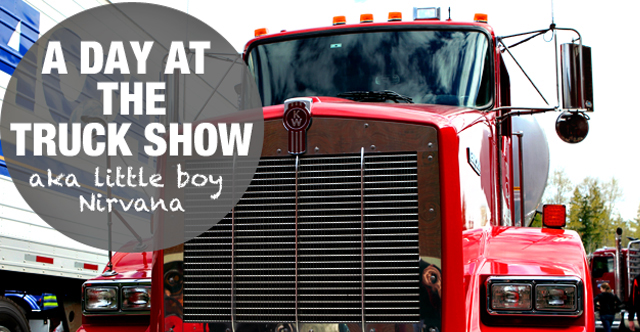 I’ve been waiting to write this post for an entire year so I’m pretty excited that today’s finally the day.  As parents who live in what is often a soggy city, my husband and I are always appreciative when we find a family friendly activity capable of taking up a large chunk of our weekend.  The annual Paccar open house, or what C’s affectionately dubbed “the truck show”, is just such an activity.

I’m not just posting on it today because of how much my family loves the event (although we all do, make no mistake, S was just as enthralled as C).  I’m also hoping to get you to think outside the box when it comes to family play days.  I want to encourage you to grab hold of an interest your child has and see if you can find an exciting way to explore it with them.
This was our second year attending and C has literally been talking about it for the last 12 months.  In fact his level of anticipation for this year’s show was so high that my husband actually teased him by telling him Christmas was this weekend, to which he responded, “No it’s not, Daddy.  It’s the truck show!”.

In case you’re not familiar with the Paccar company (I certainly wasn’t until my little guy entered my world), they make trucks.  But not just any trucks, BIG trucks, 18-wheel, tractor-tailor trucks.  You know, the kind that little boys lie in bed and dream about.
Exactly one time a year the good folks at Paccar open the doors to their technical center and allow little and big kids alike to explore to their hearts content.  From the immense outdoor track to the top-secret testing rooms (some of which my camera wasn’t allowed entrance to), there is no shortage of things to see, climb on, and wonder at.

Our truck show adventure began at home with a special breakfast of cinnamon rolls which, according to one of C’s all time favorite books Trucks Roll, is how every good trucker starts his day.

Once our bellies were full, it was time to hit the road for our hour long pilgrimage to the Paccar facility.  We got there shortly after it opened but there were already rows and rows of cars parked out on the test track turned parking lot when we arrived.

Outside there were semi-trucks, tanker trucks, trucks with cranes and fire trucks lined up for the kids to climb in and on.  There were also fireman on hand handing out hats and showing off their very tall ladders.

I told you S was excited.

Here’s C doing his best trucker impression.  Click through for more details on our day (there’s one room in particular you’re going to want to see).

S loves both trucks and shiny things so it was hard to tell what she was most excited about: the big wheels or all the opportunities to look at herself.

Inside there was food, balloons and other goodies, plus a lot more trucks.

C was especially impressed with the beds and refrigerators in some of the cabs (who am I kidding, we all thought those were pretty cool).

Next to this big engine were the rooms in which cameras weren’t allowed.  Inside were entire tractor trailers being jousled around by enormous hydrolic machines simulating the roughest terrain I can image.

By far the most jaw dropping section was the cold chamber where they actually made snow to test out the vehicles in severe conditions.

Along with highlighting their own products, they also opened up their space for local high school kids to come and show off their entries into the Shell Eco-marathon.

After lots of playing, our adventures were done and it was time to head home.  Both kids napped all the way back (thank God for small miracles).  Much of the rest of the afternoon was spent playing fireman or truck driver and going through our loot.
Does your family have a community event they look forward to every year or do you have any other outside-the-box family play ideas to share?  I’d love it if you’d tell us about it in the comments.
Similar Stuff:
Top 3 Resources for Getting Out and About with Young Kids
5 Things You Should Know About Your Library
Our Favorite Stuff to Play with ALL Weekend Long