Is it just me or are there an inordinate number of cool DIY toy projects floating around lately?  I was planning on doing a Mother’s Day gift roundup today but, honestly, you should have already bought a gift by now (I haven’t).  And if you don’t know what to buy yet, then you’re either the kind of person that has a hard time making decisions or the type that has a hard time getting things done on time (right here).  Either way – yet another “you should buy this” round up will probably only haunt your dreams tonight.
So instead of doing that to you, I took a look at my new “DIY Toy” file and was delighted to see that I already had enough finds for a post.  A few of these do require light use of some power tools but don’t let that scare you off.  They’re all very simple projects that will result in lots of fun for the kiddos.

First up is this incredible DIY Tree House Play Scene at Childhood 101.  Tree house toys like this are new to me but apparently they’ve been around for a while.  To get the goods on this idea, head over to Childhood 101 where Christie generously shares her own awesome toy along with links to her inspiration.

I have seen toys like the “Ocean in a Bottle” at lilla a before but it’s one of those things from childhood that I forgot I knew about.  This is one vintage idea that I know C will love. 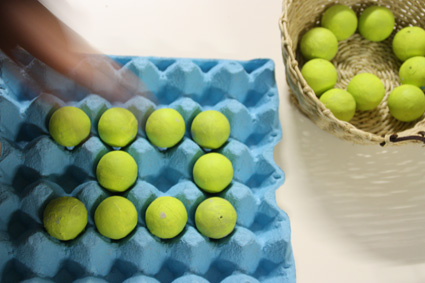 I just discovered a beautiful site that’s filled with homemade toys, lluna paints.  The Google translator isn’t the best but fortunately the pictures speak for themselves.  Two of my favorite projects are the ABC Game and the DIY shape sorter.

C is really into threading toys lately so I’m always on the lookout for activities that go beyond the standard lacing beads and cards.  That’s why I was thrilled when mini-eco‘s DIY Threading Game recently popped up in my reader.  I love that it goes beyond the standard hole in a piece of paper and actually has some heft to it. Last is this fun little Twirly Toy tutorial from Giddy Giddy at bloesem kids.  I’m guessing this toy won’t produce as much sustained play as the others but I like it’s sense of whimsy and it looks like it would take all of 10 seconds to make.