You are here: Home / Jessica / Co-Sleeping: Confessions from the Family Bed 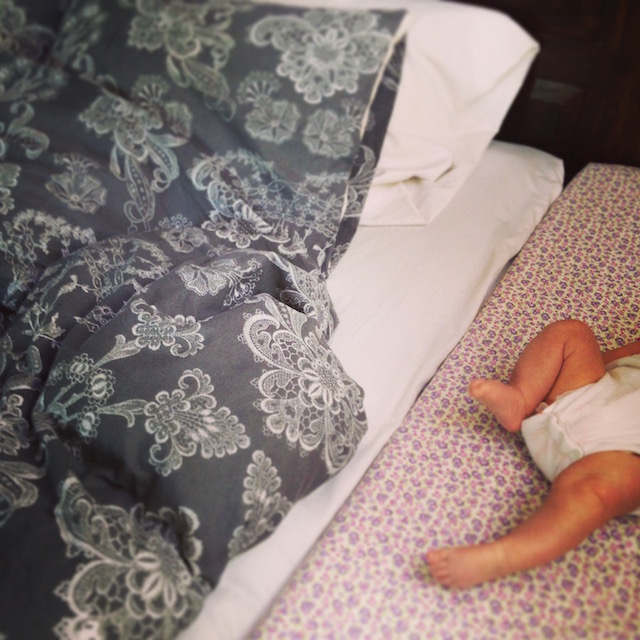 I don’t know about you guys, but sleep (or the lack thereof) is a repeated topic of conversation amongst my mom friends and I.

Thankfully,  I have been blessed with very good sleepers in all three of my kids (Aside from the first 5 or 6 months for each of them and for all naps with baby M. I love him but he totally sucks at naps.)

So while we dabbled in all sorts of sleeping arrangements and practices when the kids were babies – co-sleeping, sleep training, pseudo co-sleeping – it’s not something we have to deal with everyday anymore.

Close friends of mine haven’t been so lucky. We’re talking serious whack-a-mole/insomniac kids, a merry-go-round of sleeping arrangements, and possibly even the involvement of toddler sleep experts and sleep studies.

Here’s our contributor Jessica with her story…

First of all, I really hate that term. Co-sleeping isn’t much better, but whatever you call, it’s what we do, pretty much by default.

As idealistic parents-to-be some eight years ago, we had a plan when it came to sleeping. We didn’t know if we were having a boy or girl, but we did know our baby would sleep in the gorgeous crib on the organic linens and fancy crib mattress we had purchased because where else would he/she sleep?

Babies sleep in cribs. Right? We’d start with the crib in our room to make things easier for those nighttime nursings, and in a month or two, we’d move it down the hall to the nursery once the baby was sleeping through the night. That was the plan.

But, you know, life. Real life.

A real baby and a real couple who were initiated into this club of parenthood with one hell of a hazing. Because guess what we learned really fast. Babies – at least, our babies – sleep wherever and whenever they want, except in their cribs for any meaningful stretch of time.

So while co-sleeping wasn’t the plan, we stumbled into it in a half-dazed blur of interrupted nights and sheer exhaustion. It was the alluring path of least resistance, we took it and we didn’t looked back.

So, new plan. We’d start the baby every night in his crib, and then he could come into bed with us when he woke up. He went right to sleep, we were out the seconds our heads hit the pillows, it was all fine. Lots of sleep for everyone, and just as we’d hoped, he started sleeping in his crib longer and longer.

Our second baby followed the same pattern, and by the time number three rolled around, our four and two year olds were sharing a bunk bed in their own room, and their nightly treks to what was affectionately dubbed “the big bed” were few and far between.

But we’ve hit a major bump in the road, and it seems like I’m spending an awful lot of time staring in the rear-view mirror and wondering how we got here. And by “here,” I mean having a nine-month old and a three-and-a-half-year old hogging our bed every single night.

Also, it’s not the baby who’s the problem.

I’m not really sure where we went wrong. We start Benny in his bottom bunk every single night. Or actually, my husband puts him there after he finally falls asleep on my husband’s lap every single night. Because I don’t think Ben has every actually fallen asleep on his own, unless it happened in the car or he wasn’t feeling well.

Side note: all you parents who can put a three-year old to bed while he’s still awake and not only will he stay, he’ll actually go to sleep, well, hats off to you. I’m impressed.

Also, now that I’m sitting here writing this, I’m kind of figuring out where we probably went wrong.

But anyway, he’s in his bed. Every night. And then somewhere between 11:30ish and about 3 am, he’ll basically sleep walk down the hall, climb right over his dad and flop down in the middle of us.

Based on our prior experience, he’s supposed to be sleeping in his own bed by now. This is kind of uncharted territory for us.

And getting up to take him back to bed, and then lying down with him until he’s back to sleep, and then creeping out and doing the sleep-shuffle back to the big bed is fine if you only have to do it once. But this kid is relentless. Thirty minutes later, here he comes again.

So in the interest of getting some freaking sleep, we just make room. Unlike his baby sister, unfortunately, who even spread-eagled doesn’t take up much space, Benny is fast becoming all legs and sharp elbows and pointy knees.

He likes to snuggle up against me, throwing a leg over my hip and an arm around my neck. He likes to share my pillow. He likes to kick off the covers, and since he’s in the middle, he’s kicking them off everyone. He also talks in his sleep. A regular delight, all the way around.

In the mornings, I’m sandwiched in between Ben and our baby, who sleeps on the crib side. Oh, didn’t I explain this part yet? In a stroke of genius, my husband removed one side of the crib and wedged a rolled-up blanket down the other side so the crib mattress is flush to our mattress.

Makes it easy to pull the baby close for nursing in the night and then slide her back to the crib. It’s like co-sleeping lite. And it’s coming in really handy these jam-packed nights.

Recently, for two nights in a row, Benny slept the entire night in his own bed. Both times, my husband got up twice to check on him – it’s that unusual. But by the third night he was back to his usual routine, and when he snuggled up against me, I inhaled his little-boy smell and went back to sleep. It’s just what we do.

I’m so curious to know – what has been your families sleep experience and what was the best (or worst) sleep advice you ever got??

Got a new or picky eater?

Sign up for our newsletter to get a handy stick-it-your-fridge list of our favorite healthy recipes for toddlers and a link to all of the recipes!

Success! Now check your email to get your "stick-it-on-the-fridge" reference list of meal ideas for your 1-year-old. (Hint: I use it for my 2, 5, and 7-year-old kiddos too!) And don't forget, you can always get all the recipes here: https://modernparentsmessykids.com/30-dinner-ideas-1-year-old/