Hey guys, I’m working on a very cool summer offering for you all this week- stay tuned!

In the meantime, though, I’ve been thinking a lot about family summer travel and I wanted to share one of my earliest blog posts on the topic- all the way back from 2011. Enjoy!

A few weeks ago my family took a much needed vacation to my in-laws Montana lake house. The time away was pure bliss, the getting there and back… not so much.

It was the first time flying for both 2 year old C and 7 month S and pretty much everything that could have possibly gone wrong did.  But I learned a few things along the way that I hope you will benefit from.  Click through for my tips (as well as all the gory details).

Most experienced parents reading this will probably react with “duh!”.  I certainly would have.  But before going to the airport, it had been several months since I’d worn S and it’s amazing how quickly you forget to be on guard.

My biggest apprehension about flying with two small children was getting through security sans meltdown.  I figured surviving that line (and possible pat down) wearing a baby and trying to corral an antsy toddler would be one of the hardest parts of the experience.  So when we sailed through the metal detectors I kinda thought we were home free – I couldn’t have been more wrong.

It was only a few minutes later that S lunged for (and successfully grabbed) my piping hot fish and chips from the airport food court.  By the time I pried it from her little fingers, three massive blisters had already formed.

By some miracle, I was actually carrying an emergency cold pack in my diaper bag that day.  My toddler group had included one as part of their summertime first aid kit (I think the intention was to use it for sunburn relief).

I still went to the gate agent and requested a medic to look at S’s hand.  But by the time they showed up (3 of them, by the way, who arrived via ambulance straight to the gate!), I had already given her ibuprofen and iced the burn so she was actually pretty calm.

If you don’t have a first aid kit in your diaper bag, I highly recommend getting one.  The ouch pouch pictured above is awesome for this but even ibuprofen, bandaids, neosporin, antibactrial wipes, tweezers, a thermometer, and an instant cold pack

in a ziplock will do.

Since S had only started taking a bottle a few weeks before the trip, and because me and my boobs would be there the whole time, I didn’t have pumped milk as an essential item on our carry-on list.  But my in-laws were going to babysit for us our first day there so I did bring some frozen milk.  Once again, it was a good thing I had what I did.

Once S was burned, I couldn’t get her to settle down long enough to breastfeed. Oddly enough, she took more comfort from the bottle (a total 180 for my daughter) and that’s all she wanted the rest of the trip.  Between feeding when she was hurt and to alleviate ear pain during take-off and landing, S sucked down all 12 ounces of my frozen milk (which we had warmed by mashing it up with our hands). 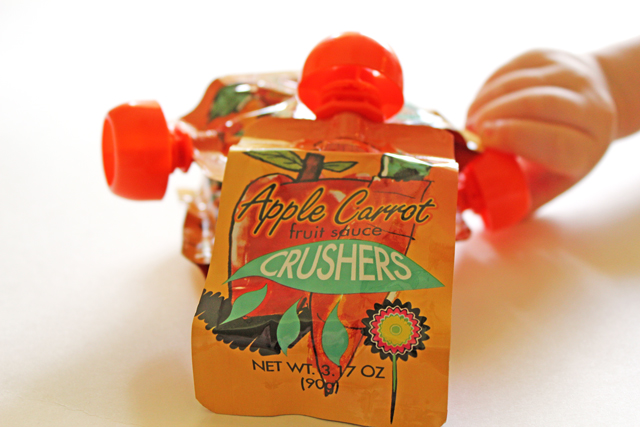 We had shown up at the airport a few hours early that day.  Our plan was to avoid a stressful rush, eat dinner there, and let C burn off some energy watching planes and running around the terminal before we boarded.  Of course, all hell broke loose once S got hurt and dinner went out the window.  Thank God I had plenty of squeezable fruit

Since it’s simply pureed veggies and fruit, I was able feed it to both my kids.  This was so helpful for packing our carry-on because I didn’t have to bring separate food for each of them.  It squeezed directly out of the package and onto S’s baby spoon quite nicely.  C thought sucking out the puree was the best thing ever – which came in handy when it was finally time to board (after a nearly 2 hour delay) and he started to panic about getting on the plane.

Lesson #5 – Prepare your child for everything they’ll experience

Although I spent the entire week before our trip talking to C about things like metal detectors and airplane noise, I totally forgot that we would actually be walking out onto the tarmac to board the plane.  (Seattle to Missoula is a short flight in a small plane.)

As soon as we got outside C’s attitude went from “Wow, look at the planes!” to “I want to go home”.

Lesson #6 – Have lots of sources of comfort/distraction

The moment I felt C tense up, I handed S off to her daddy and went into “make it work” mode.  I was able to calm his fears and coax him on board by:

Lesson #7 – Keep calm and carry on

That meltdown I mentioned in my title – that was referring to me, not my kids. When S got hurt, our already late-night flight was massively delayed, and they wouldn’t let us use the car seat we’d hauled through the airport for C – I pretty much wanted to throw myself on the ground, kicking and screaming like a toddler.

But (somehow) I didn’t, and amazingly enough neither did my actual toddler or baby.  Both kids did amazing through the entire ordeal (S is now fully healed by the way) and I think a lot of it was due to my husband and I putting on a brave face and refusing to crack.

So that’s it!  I did a lot of research about how to keep the kids happy in the airport and on the plane but I just wasn’t prepared for all that befell us that day. I really hope my tale helps the next traveling family!

My Secret Tool for Ensuring a Great Summer with the Kids